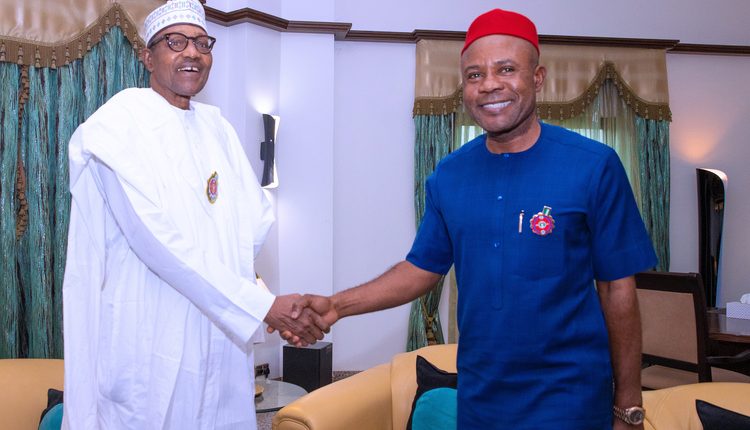 A Nigerian oil investor, Peter Mbah says lack of adequate investments in the downstream sector is the major cause of the perennial fuel scarcity and its attendant long queues in filing stations across the country.

The Chief Executive Officer of a private company, Pinnacle Oil and Gas Limited, Peter Mbah stated this at the weekend, while speaking to State House Correspondents shortly after the company paid a thank-you visit to President Muhammadu Buhari at the Presidential Villa, Abuja.

Chief Mbah, who is the People’s Democratic Party, PDP, governorship candidate for Enugu State in the forthcoming election, said in order to bridge the gap, Pinnacle Oil and Gas has invested one billion dollars to address the stagnation of investment in the downstream sector.

Asked whether the country will ever get over the intermittent scarcity it witnesses every time, the industrialist said that with the intervention of his company and investments from other Nigerians in the downstream sector, the problem will soon be a thing of the past.

He said: “There has been a deficit arising from the set of investments Pinnacle has done in the last decades. But what we’re doing right now is to address that stagnation of investment in the downstream oil and gas industry.

“This is an investment size of about a billion dollars. So we are expecting to see more of such investments because what the Pinnacle has done is to create some efficiency in the supply and distribution value chain of the downstream sector.

“So we are indeed expecting that more investments in the downstream sub sector would completely eliminate the sort of scarcity we are witnessing today.”

Asked what he came to do at the nation’s seat of power, Chief Mbah said he alongside his team came to show appreciation to the President for accepting to inaugurate the company’s storage terminal adjudged to be the largest storage terminal in West Africa.

He said the offshore intake of the storage terminal is also adjudged to be the deepest intake facility in the entire Africa.

According to him, “We, Pinnacle Oil and Gas limited, have come here to express our profound gratitude and our heartfelt appreciation to Mr. President.

“So we do have SPM (Single Point Mooring), and CBM (Conventional Buoy Mooring). Those are the offshore facilities we have. Those facilities have the capability to take the largest vessels, you can imagine and discharge over 100 million liters of clean petroleum products within 24 hours.

“This is typically what takes the industry 32 days to discharge. So we have largely come here to express our gratitude to Mr. President, for the honor he gave us in inaugurating this largest facility, which has actually changed the face of the industry, because it has eased as you know, this facility is located at the Lekki free zone, just by the Dangote refinery.

“So what it has done, it has eased the congestion and the gridlock we have at the Apapa area in Lagos. It has also reduced the cost of supply and delivery of petroleum products in different parts of the country. It has also provided jobs for teeming unemployed Nigerians. So this is why we thought it necessary to come and say thank you to Mr. President,” he said.